Ben over at One Mile at a Time has a very useful post on redeeming miles HERE.  As a full-time points and miles blogger, Ben is usually a great source for information and this post is no exception.  He covers many of the tips that I've mentioned in the past, and I'd recommend bookmarking this post for future reference.
Posted by Rich at 7:17 AM No comments:

Listed on my sidebar are the three travel/points bloggers that are my "go to" guys for travel information: Gary @ View From the Wing, Ben @ One Mile at a Time, and Greg @ The Frequent Miler.  Yesterday Greg posted on a positive change to Bluebird's terms and conditions.  As of July 1, Bluebird's "Add Funds" terms look like this: 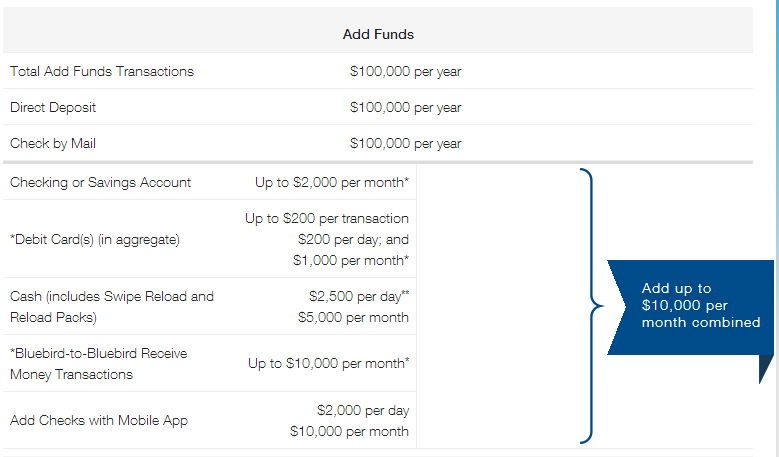 However, TFM reports that the limit at Walmart is actually $1,999.99 per day.  The previous daily load limit was $1,000 and the daily online debit load was $100.  If you have a miles earning debit card (or Visa/MC prepaid debit cards that still work @ Walmart) Bluebird had just  reduced the number of times you'll have to visit Wally World by half!  That's great news if, like me, Walmart is not your favorite place.

UPDATE:  I can confirm that the Walmart limit is not $1,999.99 per day.  That is Walmart's limit per register, per transaction.  You can load the full $2,500 by visiting more than one register or a combination of a register and the Walmart Moneycenter automated kiosk.
Posted by Rich at 7:45 AM No comments:

For anyone who lives anywhere near a Delta hub, the Suntrust Delta Skymiles debit card was one of the best deals out there.  The sign-up bonus of 5K Skymiles wasn't massive, and there was the hassle of having to establish a Suntrust checking account, but the earning potential was massive.

I posted a month or so ago that Suntrust had stopped promoting the card on their website, but that there were reports that the card was still available in branches or by phone or chat.  Well, I was motivated to check up on the card when Bluebird changed their daily load limits from $1,000 to $2,500, since I sometimes use my Skymiles debit card to load Bluebird (and earn miles for doing so).  Unfortunately, it seems that the card is well and truly gone for now.  During an online chat with Suntrust customer service, I was informed that Suntrust "is no longer offering that card at this time."

It seems that if you don't already have a Suntrust debit card, your window of opportunity has passed.  If the card comes back in the future, I can only imagine that it will be with a more restricted miles earning structure, i.e. no miles for PIN based transactions.

EDIT: As additional support, I note that the former website for the card www.deltadebitcard.com [link is now spam, so I've deliberately left it cold] has apparently been abandoned by Suntrust and snapped up by a domain squatter.  However, if you have any faith in the diligence of Delta's IT guys (Ed: Ha!), you can rest your hopes on the fact that Delta still promotes the card on their website: http://www.delta.com/content/www/en_US/skymiles/earn-miles/earn-miles-with-partners/check-card.html.
Posted by Rich at 7:20 AM No comments: