Just in case you've been living under a rock, or are a Sox fan (which might be worse than living under a rock), the Lovable Losers just won the National League Pennant. If you're a Cubs fan who's travel plans are more flexible than mine (and if you have a heckuva lot of Starpoints) you might want to check out Starwood Moments TODAY. Starwood is auctioning off seats in their Luxury Box at Wrigley for Games 3, 4, and 5 of the World Series. For game three, they will have Andre "Awesome" Dawson on hand to sign autographs.

The Luxury Box is pretty nice and you will definitely have a great view of the game. 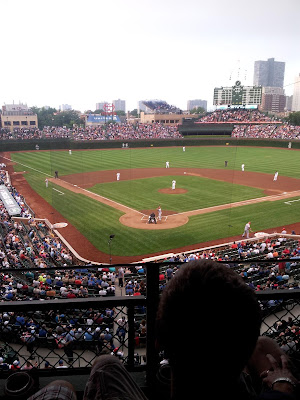 I took my dad for a game a few years ago and reviewed the Luxury Box experience HERE. As of press time, all of the auctions are north of 250,000 Starpoints. But, good heavens man, this is the Cubs in the Series. This isn't just a once-in-a-lifetime event, it's a once-in-several-lifetimes event!

If your Starwood balance isn't that healthy, there are also some other Series-related auctions.
Posted by Rich at 6:16 AM No comments:

Booking Awards- A Useful Post from View from the Wing

The ur-points-and-miles blogger is Gary Leff over at View from the Wing, at least in my book. That's why his blog is always on my sidebar, it's a great source of information. This morning's post on award booking is no exception, since it offers some useful guidance for using all those miles you've saved up. It's worth a read and a bookmark.
Posted by Rich at 7:10 AM No comments: