There's been some concern over whether the Priceless Surprises sweepstakes that IHG is sponsoring was not, in fact, a guaranteed winner as some speculated:
More than 40,000 IHG points for more than $46 and a cramped hand

Originally, it appeared that every play would result in at least 500 IHG points, but in the past day, plays have been resulting in "you haven't won a prize" messages as reported on Flyertalk.  Well, it seems that was a glitch: 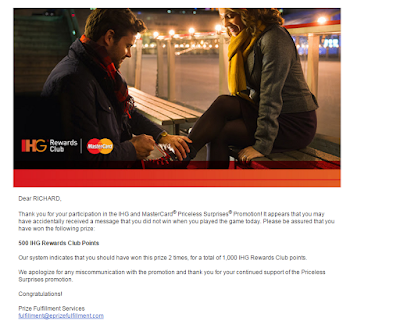 Whew.  I sent out a number of handwritten entries, so I'm glad to see this was just a glitch.
Posted by Rich at 3:10 PM No comments:

Amex is on a Bluebird Hunt - Massive Wave of Bluebird Shutdowns

Amex's Bluebird card has been a useful instrument for manufactured spending for a few years.  It allowed fee-free loading of up to $5,000 per month and could be loaded via various pre-paid debit cards.  The money could then be easily withdrawn to your checking account.  Personally, I mainly used it to generate Delta Miles via Suntrust.  It appears that it's usefulness is at an end.  This morning, Amex sent out a wave of Bluebird shut-down notices like this one: 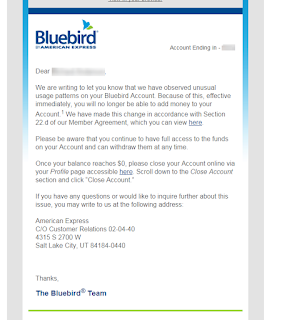 The shutdown wave is being discussed over at Flyertalk, and seems to be pretty thorough.  Both Mrs. Pointsninja and I were shut down.  This will no-doubt come as a blow to many folks who had been using the card to do a limited amount of low-cost MSing, but it's not surprising.  Using the Bluebird as nothing more than a means of shifting money around was a money-loser for Amex, and if something can't go on forever... it won't.
Posted by Rich at 8:01 AM No comments: