I have long dubbed American Express as America's Most Generous Credit Card Company™.  Amex is well-know for generous sign-up offers as well as its Sync program and for its long-running Small Business Saturday promotion.  For several years, Amex offered a $25 statement credit for making a $25 purchase with a small business that accepted American Express cards.  Last year, Amex dropped the value of the credit to a (still generous) $10 per card.  I'm delighted to say that Small Business Saturday is coming back for 2014 and it's more valuable than ever!

According to the terms and conditions for this year's SBS, each Amex card iseligible for 3 statement credits of $10 each.  Starting November 16, you'll need to register your Amex (don't forget authorized user cards!) and make 3 purchases of $10 or more at a qualifying small business.  Amex helpfully provides a Map of qualifying merchants.  I'm guessing that this promotion will run like the recent local Shop Small August promotion that offered 3 x $5 statement credits.  In that case, I was able to make three separate purchases at the same merchant for each card I had.

Personally, I'm surprised and pleased that this year's promotion is more valuable than last year's.  I'd also like to note that Amex provides some helpful tools for small businesses to promote the event and drive sales.  This is a great opportunity for businesses to bring in customers and we've certainly seen some creative ideas for taking advantage of Amex's generosity.

View From the Wing recently posted details regarding an offer that would allow the purchase of United Miles at 1.9cpm.  Gary say's he's not a buyer at that price.  But how about at 1.86cpm?  Still no?  How about if I throw in a free personalized mug?

FTD is currently offering 1,500 United miles for any purchase.  The cheapest thing (that I can find) on their website is a personalized "I love you" mug for $14.99.  It does qualify for the 1,500 miles: 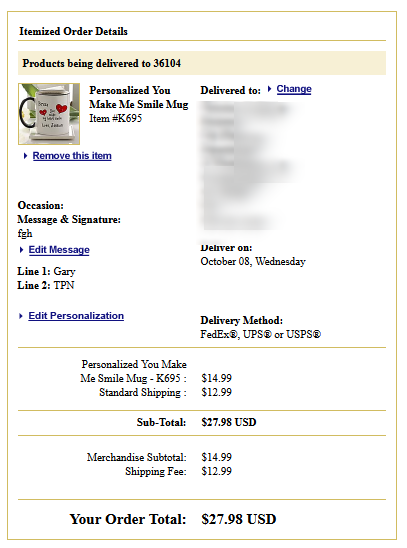 Other bloggers have covered the Club Carlson Visa Card extensively and I've previously covered it HERE, so I won't go into it in depth about the card in this post.  The signup bonus for the card is 85,000 points (approx. $4-500 value).  The card carries an annual fee of $75, but is offset by an annual 40,000 point ($200+ value) bonus on the renewal date.  The card also confers Gold status in Club Carlson's program and earns a respectable 5ppd on all spending.  Of course, as many other bloggers have noted, the card also carries one other killer benefit: the last night of any multi-night award stay is free.  For instance, I'm using the card to book two nights in a "business class" room at the Radisson Blu Zurich Airport, a booking that would ordinarily cost me around $800 or 150,000 points.  But since I have the card, it is only costing me 75,000 points.

Club Carlson doesn't have the greatest mix of hotels, but the do have some pretty decent properties (generally Radisson Blu hotels in Europe) where you can get real value out of your points.  I'd recommend as a card to consider for anyone looking to diversify or planning a trip to Europe.  All three of the blogs on my sidebar will have links to the current best available signup offer.

All that said, I've had the card for more than a year and while I really like it, I'm consistently underwhelmed by  the promotions that US Bank (the card issuer) puts on for actually using the card for ordinary spending.  Today, I received a letter notifying me of a (targeted) bonus promising that I can "EARN 1 BONUS POINT PER DOLLAR SPEND THROUGH OCTOBER 31st."  Sounds great, right?  Well, in the smaller print, it turns out that the offer is more complicated.  You have to register first.  Then, you have to spend $2,600 dollars to trigger the additional 1ppd on the next $2,000 you spend before October 31st.  So, the bonus is really an extra 2,000 points for spending $4,600 dollars on the card.  That works out to a significantly less impressive 0.43ppd.  That's better than a kick in the teeth if you were already planning to spend that much on the card.  But if you weren't I'd hardly call it strong motivation to put nearly $5,000 spending on one card in 60 days.
Posted by Rich at 1:03 PM No comments:

The single most lucrative manufactured spending opportunity ever was The Mint.  Many people netted millions of miles and points courtesy of the Golden Dollar boondoggle.  When The Mint shut down, it was if the world were ending.  Yet, people found new ways to meet spending requirements and earn miles cheaply.

Now word comes that we are about to lose another lucrative avenue for spending: Amazon Payments.  For years, Amazon has allowed users to make payments, up to $1,000 per month, with a credit card and has not charged a fee.  Though this wasn't an enormously lucrative opportunity, it was an extremely reliable way to meet spending requirements for new cards.  Over at One Mile at a Time, Lucky reports a change in Amazon Payments terms and conditions that signaled the demise of this opportunity, effective October 13.  This is bad news.

As Glenn Reynolds is fond of saying, "If something can't go on forever, it won't."  The free transfer option was a money loser and had to come to an end eventually.  But since no one knew when it would end, MS-oriented users had the Sword of Damocles hanging over their heads for years.  Amazon Payments was a golden goose that laid reliably for years and almost no one wanted to kill it by abusing the system.  Consequently, many users refrained from having multiple accounts, sending money directly to themselves, or other practices that, being verboten under the Ts & Cs, could get their accounts shut down.  But, as Justice Marshall said, "The value of the Sword of Damocles is that it hangs - not that it drops."  This particular sword has dropped and, as a result, I predict a lot of misbehavior between now and October 13.

UPDATE:  Just reviewed the revised Terms.  This seems to be the operative language:

UPDATE to the UPDATE:

So, I looked at the old terms and conditions.

They provide the following with regard to personal accounts:

That's intriguing.  If I'm reading this right, personal accounts weren't supposed to be able to receive credit card payments prior to the October 13 update.  However, those with personal accounts have been able to do so.  It appears that the new language removes the right to receive any payments of any kind if you have a Personal Account.

I guess we'll have to wait until next month to see whether Amazon's coders can do what what Amazon's lawyers want done.