We had a great time at Machu Picchu and a full review of our trip will be coming up, but here's one of the standout pictures!  The llamas are really cool.

Amex Platinum Downgrades its Benefits, Offers Compensation to Some- I Got a Rock.

Word has recently spread through the points and miles community that Amex Platinum was losing the benefit of access to American and United Airlines lounges.  Lucky covered it here.  Well, the long and short of it is that Amex has been offering various amounts of "compensation" to affected cardholders, from $200 to $500 statement credits.  At least, that was what was offered in the first round of e-mails.  Yesterday, I received my notification.  Here's what they told me:


Yep, I got a rock.  Thanks, Amex.  Thanks a lot for taking away a benefit and "easing the sting" by reminding me about a benefit that I already had.  This is definitely a net loss in value for the card and I plan to downgrade as soon as the new year rolls around.
Posted by Rich at 5:29 AM No comments:

Because Macchu Picchu is in a pretty remote area, the only option for reaching it is by foot or by train.  Since treks have to be arranged far in advance and take several days, we opted to take the train.  Peru Rail runs several routes to Aguas Calientes (Machu Picchu Pueblo); from Cusco, Urubamba, and Ollantaytambo.  The Ollantaytambo train takes the least amount of time at around an hour and a half.  We chose that train.

Though many people stay overnight in Cusco, Urubamba, or Ollantaytambo and take a morning train into Aguas Calientes, we chose to take an afternoon train from Ollantaytambo and overnight in Aguas Calientes.  For a short trip like ours, that option gives you the most time to enjoy Machu Picchu itself, because buses begin running at around 5:30 and the site opens around the same time.

We booked the "Vistadome" service and arrived at Ollantaytambo station to board train Vistadome 603 for our trip 3:27 PM trip to Aguas Calientes. 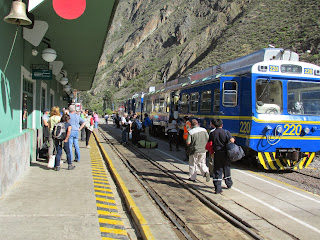 The train itself was fairly nondescript but comfortable for a short trip.  Seats are assigned at ticketing, and we were fortunate enough to be seated near the front of the first car, which meant that we had a good view out of the front window.

An interesting aspect to our trip was that we shared the ride with a film crew from "Strip the City" a Science Channel show that's going to be doing an episode on Machu Picchu.  They set up cameras: 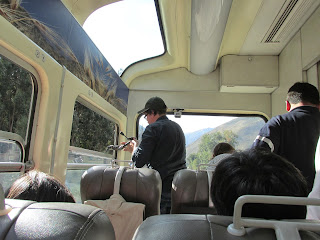 And filmed all aspects of the trip from the station: 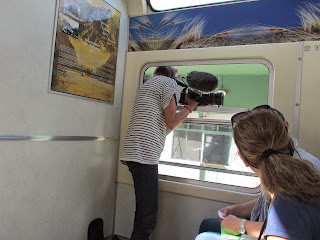 To the engineer himself: 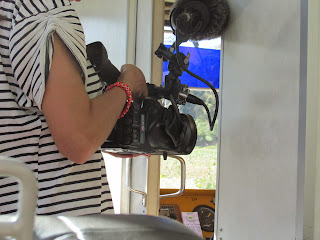 And just because I sometimes like to be meta, I took a picture of someone who decided to film the film crew: 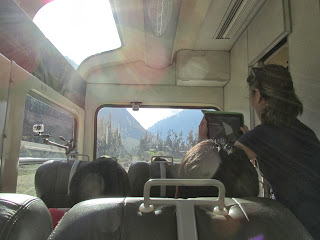 I'll be awaiting the episode (mid-March, maybe) with great anticipation.

Anyway, the scenery along the ride is pretty magnificent: 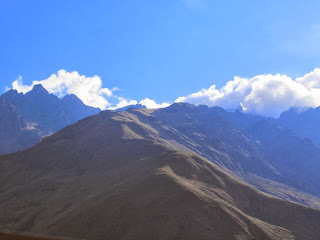 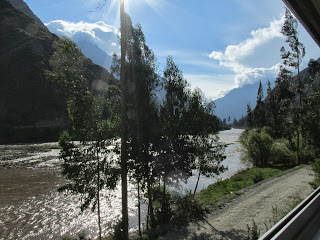 Even if the "snack" served is not: 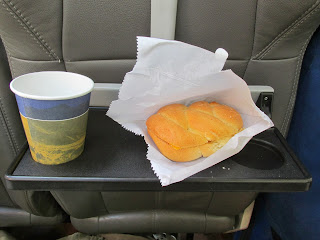 The snack was a roll with peppers and cheese and tea or soda and was included in the price of our ticket (approx. $55 one-way).  After descending from the high desert down into the jungle, we rounded a bend and got our first look at Aguas Calientes, perched on the banks of the Urubamba River. 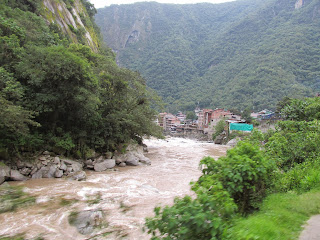 When we pulled into the station, we caught a glimpse of the far more expensive and fancy "Hiram Bingham" train that runs from Cusco to Aguas Calientes.  Maybe next time... 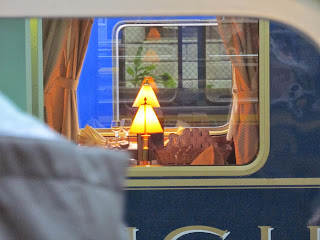 UPDATE:  A reader has pointed out that physical gift cards are no longer available on the Sony site.  Only e-giftcards.  That seriously compromises the value of this deal since cardpool will only pay 70% for e-gift cards.  You still earn a profit, but only $2.80 per card.  That's probably not worth the effort for most folks.  Anyway, here's how the deal would work now:

Many people use Amex's Bluebird card (a prepaid card that can be loaded with Vanilla Reloads) as a means of managing funds and generating miles.  A common tactic is to purchase reloads with a miles earning card, load the funds to Bluebird, and pay that (or another) credit card bill from Bluebird's bill pay service.  However, sometimes it's easier to simply withdraw the funds to your linked checking account, an option that Bluebird has always allowed.

However, since Bluebird keeps "improving" its site, the link for withdrawing money has moved around a bit.  Well, the latest iteration moves the link again, but this time it's much easier to find.  Now you simply log in and click the "My Account" tab at the top of the page:

This will take you to, er, well, the "My Account" page.  Now go down to the bottom where Amex has added the intuitive "Withdraw Funds" link. 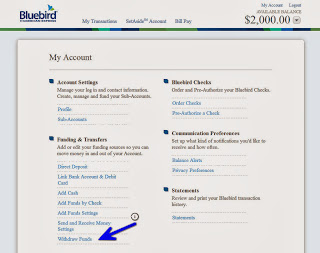 That takes you to your withdrawal options, where you can simply transfer funds out as before. 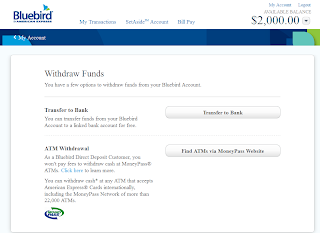 Anyone who regularly engages in Manufactured Spending should be fully aware of the actual cost of their spending.  For example, if you buy $1000 in Visa gift cards at Winn-Dixie, you'll pay $11.90 in purchase fees.  If you then liquidate through purchasing money orders, the you'll likely pay another $0.70 in purchase fees.  That brings your actual cost for spending $1,011.90 to $12.60.  So, with a single miles card you're paying 1.26 CPM.  With a 2% cashback card, you're making .74% profit.  With the 2.2% Barclay Arrival card, your profit (in the form of travel credits) goes up to .94%.

Winn-Dixie also participates in the Fuel Rewards Network, a loyalty card system that pays off in cents-off per gallon (CPG) of gasoline purchased at Shell stations.  Normally, Winn-Dixie spending earns 5 CPG per $50 spent.  Unfortunately, only the fee portion of Visa gift card purchases counts.  That means that for roughly every $5,000 in manufactured spend, you'll also earn 5 CPG off your next gas purchase (up to 20 gallons).  Since I drive a truck with a better than 20 gallon tank, I value that 5 CPG at approx. $1.  That return is so minimal that I do not factor it into the "cost" of my spending.

However, for the rest of December, there's a way to juice that return.  Fuel Rewards has partnered with Mastercard and is paying a bonus of 3 CPG for every $100 spent at Winn-Dixie (or any other FRN partner store) when you link your Mastercard to your FRN account.  I didn't expect that it would work, but in the spirit of scientific inquiry I made a test purchase with my Barclay Arrival card (which is a Mastercard) after linking it to my FRN account.  The purchase quickly showed up in my FRN "dashboard", but did not show any fuel rewards earned.  However, to my surprise, my account now shows that I earned 30 CPG for the $1,011.90 purchase:

Since I value 10 cents in Fuel Rewards at approx. $2 (10 cents x 20 gal.), that means I earned $6 worth of gas on the purchase.  This should work with any miles or cashback earning Mastercard once you've linked it to your FRN account and is a nice way to reduce the cost of your manufactured spending for the rest of December.


UPDATE (12/9/13):  My November miles posted fine, and it looks as though the language I discuss below has been around for some time for newer cardholders.  Points, Miles, and Martinis posted identical T&Cs back in July.  So, it appears that this is just a case of Suntrust getting everybody on the same page.

Okay, as promised, I went through the notice I received regarding the new T&Cs for the Suntrust Delta Debit Card, and I'm troubled by what I found.

"Only PIN Point of Sale and signature-based purchases (including small dollar purchases that do not require a signature), Internet purchases, phone or mail order purchases or automatic bill payments qualify for mileage earnings.  Cash Advances, cash portion of a PIN POS sale with cash back, ATM transactions, payments for stored-value cards, wire transfers, money transfers, quasi cash, or travelers checks do not qualify."

The new language that I received yesterday is almost identical, but the Devil may be in the details.  Now the T&Cs read:

"Qualified Purchases: Only PIN Point of Sale and signature-based purchases (including small dollar purchases that do not require a signature), Internet purchases, phone or mail order purchases or automatic bill payments qualify for mileage earnings.  Cash Advances, cash portion of a PIN POS sale with cash back, ATM transactions, payments for stored-value cards, wire transfers, money transfers, money orders, cashier checks, quasi cash, travelers checks, purchase of monetary instruments or a PIN POS/signature transaction that contains either in whole or part of one or more of the previously excluded transactions types do not qualify."

The bolded language above reflects the new language in the T&Cs.  Notice anything significant there?  It's hard to say whether Suntrust will attempt to enforce these terms or, indeed, if it is even possible for them to do so, but I'd say that they are definitely aware of what is going on.  I guess we won't know for sure until next month when miles post under the new T&Cs.
Posted by Rich at 3:41 PM No comments:

Today at the lair, I received an envelope from Suntrust Bank.  One never likes to get unexpected envelopes from banks, you know.  They almost never contain anything good.  At best, its some mind-numbing revision of the Bank's privacy policy or some such.  At worst it's dire news of ominous portent.  Well, that may be the kind of letter I got today.  I'm still trying to figure it out

Suntrust has been very generous with their Delta Debit cards.  The terms provide that the card earns one Skymile per dollar for all purchases, pin and signature based.  That makes for some extremely lucrative miles earning purchases at Wal-Mart, grocery stores, and a few other vendors.  Well, the letter I received today indicates that "the terms and conditions that govern the Delta SkyMiles Consumer and Business Check Card" have changed.  But after a quick skim of the new T&Cs, I don't see any material changes.  I'll compare it to my original T&C tomorrow and hope for the best.
Posted by Rich at 8:18 PM No comments: