Occasionally, I get asked "don't all those new cards kill your credit score?"  The answer is "not really."  Gary over at View From The Wing has a very good post that explains it all.

Basically, a new application that results in your credit report being "pulled" will cause a temporary drop in your credit score (usually less than 10 points).  However, getting approved for a new card might actually raise your score by decreasing your credit utilization level.  My score is comfortably over 800 despite having applied for and received around six new cards in the last year.
Posted by Rich at 8:27 AM No comments:

As I've written about before, my Suntrust Delta Debit card has been a fantastic source of miles over the past few years, netting Mrs. Pointsninja and I close to well over half a million miles.  However, it has recently been reported on Flyertalk and elsewhere that Suntrust is altering the deal: 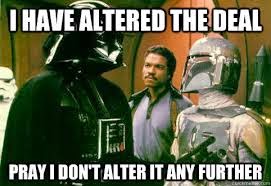 Well, I got the dreaded letter today.  As of July 25, 2015, Suntrust is hamstringing the card, limiting monthly mileage earning to 2,000 miles.  To add insult to injury, the earn rate is dropping from 1 Skymile per $1 spent to 1 Skymile per $2 spent.  PLUS, the annual fee is going up to $95.

P.S.:  The one conceivable upside is that this handicapping could possibly result in the Suntrust Delta Debit Card becoming available to new cardholders sometime after July 25.  Even at the reduced rates, there are people for whom this product could be useful.  Particularly if Suntrust offered a sign-up bonus as a sweetener.  The only evidence I have to support this pie-in-the-sky scenario is that Suntrust didn't kill the card entirely, which I have long expected them to do.
Posted by Rich at 4:54 PM No comments: